The Choice Is Yours

"The Choice Is Yours"

Mike Herro & David Strauss & J. Stone Alston
"The Choice Is Yours" is the sixth episode of the first season of All American. It premiered on November 28, 2018.

REVELATIONS - The return of Layla's music mogul father gives Spencer the perfect opportunity to give back to Crenshaw and reunite with an increasingly distant Coop. But Coop's deepening affiliation with Shawn's gang threatens Spencer's good intentions. Billy, Jordan and Asher take a journey to Malibu to scout their next big rival as tensions simmer between Jordan and Asher.[2] 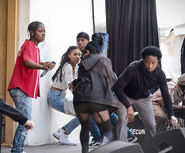