Nkechi Okoro Carroll & Micah Cyrus
"The Bigger Picture" is the eleventh episode of the third season of All American. It first aired on April 26, 2021 to 0.62 million viewers.

A LITTLE HELP - When a college scout comes to talk to Spencer, he must decide if the strings attached is worth it. Billy realizes that the recruiting game has changed and has an idea on how to help his players. A police shooting of a young black woman hits to close to home for Olivia, leaving her to take drastic measures to get justice. Jordan is struggling with everything going on, so Spencer, Asher and JJ try to help him out. Layla is inspired by Coop when Coop does something selfless and for a good cause. Meanwhile, Grace learns something about Principal Carter that shows him in a different light.[2] 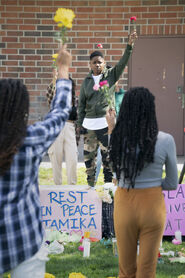