Jameal Turner
"Regulate" is the fourteenth episode of the first season of All American. It premiered on March 6, 2019.

FAMILY VALUES – Spencer wants no part of his father's return and Billy confronts him about their tumultuous past. Meanwhile, Layla forces Asher to re-evaluate his life.[2]

Spencer is less than thrilled about Corey’s reappearance, so he immediately shuts down all of Corey’s attempts to reconnect with him. Dillon’s 10th birthday is coming up and Spencer wants to go all out for it. However Coop tells him that having the party at the park is a bad idea because Tyrone still has a grudge against him being thrown out by Spencer. However since it’s a public park Spencer doesn’t see it as an issue. So all of his friends and family come to Dillon’s party except for Jordan.

Elsewhere Asher is getting too comfortable living at Layla’s house which she confronts him for as he needs to get his life back together. After Dillon’s party Spencer and Layla go to her house only to find out it was robbed. The cops say that there were 3 black men by her house so Spencer immediately thinks Tyrone and his gang members robbed the house. So he goes to confront him about it. Outside Layla asks Asher if he had anything to do with the security cameras being shut down, which he says that since he was doing illegal stuff while hosting a private casino he turned them off and forgot to turn them back on. So she tells him to leave as he’s done too much. However the next day she finds out it was a bling ring who robbed the house and he can come back but he chose not to because he does need to get his life back together.

When Spencer went to confront Tyrone about robbing Layla’s house he almost kills him but Corey came just in time to save him. However he’s ungrateful as that’s not enough for abandoning him.

Jordan has been spending a lot of time with his grandfather, Willy, and its concerning Billy. He says that Willy is a manipulator and that’s what he did at their last game by bringing Corey to mess with Spencer’s head. So he says that he needs to think about how he wants to win in life, by not stepping on his friends.

Corey and Billy meet in his office and Billy asked if this office was Corey’s would he still abandon his kids, which Corey says he’s not proud of doing, but felt it was the only option at the time. He came back because it was so hard to pick up the phone so he couldn’t wait forever. He also says that he has the power to ruin Billy’s happy and perfect life so he shouldn’t underestimate him.

Grace comes back home and Spencer tells him that he decided he needs to talk to his father about everything. He also says he doesn’t want to tell Dillon until they know Corey’s full intentions. Before he leaves, Grace tells him that she has to tell him something she should’ve told him long ago: she wasn’t completely honest about why Corey left them.

Back at Layla’s house she is having a hard time staying alone, especially when her dad doesn’t answer her phone call. She then gets a knock on the door and it turns out it’s Olivia, who came by to keep her company, which she is grateful for as they hug.

Billy goes to his father’s house and asks him what he needs to do to get him out of Jordan’s life for good, by taking out his checkbook.

Spencer meets Corey at the park and tells him he’s only here because he only has one question to ask him. Did he come back because he legitimately wants a relationship with Spencer and Dillon, or is it because Spencer’s all over the news and he’s now realized his son is destined for greatness, or is it because he wants to blow up Grace and Billy’s life because of the affair they had while they were married to him and Laura? 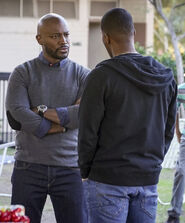