Mike Herro
David Strauss
"Protect Ya Neck" is the tenth episode of second season of All American. It premiered on January 27, 2020.

INSIDE THE BUBBLE - With Tyrone back on the streets, Spencer is being a little overly protective of Coop and Laura and finds himself in uncharted territory. Olivia is nervous about her upcoming SoLA Muse Cotillion and tries to lean on Asher, but he seems more focused on football than ever. Coop and Patience are trying to get back into a rhythm, but things get worse when Coop’s jealous streak comes out. Meanwhile, Jordan alerts Billy about what he sees on social media that makes Billy worry a little.[1] 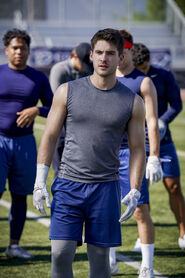