Greta Onieogou
Layla Keating is a main character on The CW series All American. She is portrayed by Greta Onieogou.

Layla is Beverly High's "it girl," but when she gets home, to her empty mansion, she's just a lonely girl in a lonely world. Kinder than she seems, Layla feels an immediate connection with Spencer. She has tried to kill herself more than once.

In "Pilot", Jordan introduces Spencer to the group including Layla and Asher, who plays the same position and isn't too happy about Spencer joining the team. He says something rude and Spencer walks away. Layla ends up apologizing for him and they engage in conversation. Realizing that Spencer notices things that other people can't, Layla is curious as to what he sees in her. He says she's like a defensive back: confident, wants to call all the plays, and seems lonely.

Spencer walks off the field. He's headed towards Olivia, but Layla swoops in. She apologizes for the party and claims she didn't know. Spencer assures her that it's okay and they agree to be friends.

In "99 Problems", after Layla and Spencer have a heartfelt talk, she wants him to stay longer and have a beer; however, a responsible Spencer declines.

During the Booster Party, Spencer clings to Olivia until Layla walks in. Layla confides in Spencer; revealing the loss of her mother.

In "I", Layla and Olivia are "friendly" now. Olivia, in a desperate attempt to brush everything that happened during her period of drug abuse under the rug, inadvertently shuts Layla out. Later, Olivia tries to apologize; however, Layla flips the script by shutting her out. After Layla and Olivia commemorate the passing of Layla's mother, their friendship is re-established.

In "Lose Yourself", Layla and Olivia are BFF's again and Layla encourages Olivia to go to Asher's party by saying that she needs a "fresh start" since returning from rehab. Layla mentions that Olivia should show more interest in Spencer. Olivia finally agrees to go but shortly after arriving she and Spencer are naked in a jacuzzi -- a dare brought on by Layla during a gambling game to get them together.

In "All We Got", it's Spencer's birthday, and Layla, gives him field seats to a UCLA vs Eastern Nevada football game as a "thank you"/ birthday gift for helping Asher. Spencer tells her his father is the coach for the Houston team and he hasn't seen him in six years.

Asher is still lying about having money. It's making Layla frustrated.

Layla's father, JP, just shows up. Layla literally runs into him when she goes back home after the party. He introduces Layla to his new younger girlfriend, Chynna. Layla isn't surprised.

In "The Choice Is Yours", Layla is cordial with Chynna but she's suspicious of her intentions in regards to JP. After the game, JP, Chynna, Layla, and Asher are having dinner. JP is not impressed with Asher. Layla becomes annoyed with Asher when he starts talking about his father taking him in a private jet to go snorkeling. She leaves the table just when Spencer comes around to serve their food. She encourages Asher to be himself, but he's over it.

Everyone can tell Layla doesn't like Chynna. Layla finds an engagement ring in JP's bag when she visits him and Chynna at the recording studio. She steal it. She shows Spencer the ring; she's nervous to the point that it's crippling. She really doesn't trust Chynna. Spencer sees nothing for her to be concerned about, but Layla won't let it go. Spencer and Layla meet JP and Chynna for lunch.

Backstage in the dressing room, Chynna is getting ready for her performance when Layla and Coop walk in to wish her good luck. Chynna becomes dumbfounded when Coop mentions Alvin and his shop. This reignites Layla's concerns when she tried to let them go.

Later that night, Layla is mad at JP because she feels neglected by him. She shows him the engagement ring and he apologizes. JP admits that he was selfish and he hasn't been the greatest father to Layla. He tells Layla that he was going to give it to her since he didn't have a chance to give the ring to her mother. Layla and JP hug before he gets in the limo.

In the restaurant, Layla praises Spencer for being real and she kisses him, then they make out. Olivia is bawling outside.

In "California Love", Olivia, after school, finds Layla sitting outside of the restaurant. Olivia gives Layla some advice; prompting Layla to come clean about her kiss with Spencer.

During the homecoming dance, Layla dumps Asher. A fragile ego partnered with Asher's drinking causes him to air everything out on stage in front of the whole school. The secret is out, now Layla knows Olivia and Asher slept together. In the hallway after Asher's fiasco, Layla calls Olivia a "treacherous bench" but Olivia calls her a "hypocrite" for kissing Spencer. Olivia was never oblivious to Layla's true intentions. She knew that Layla wanted Spencer since day one.

In "Homecoming", after admitting that they've both made poor choices, Layla and Olivia make amends. It's gonna take some time for their friendship to get back on track; however, their willing to try.

Later, after officially opening her heart up to Spencer, Layla appears at the Baker's house and in Spencer's room. The two have sex. Afterwards, Spencer finally admits his feelings for her.

Layla Keating is Record Producer heiress whose and she is very pretty and attractive. Mostly she has a lot of good looking guys like Asher and Spencer fall for her. In the first two seasons, she has chest-length hair whereas it's noticeably shorter in season 3. 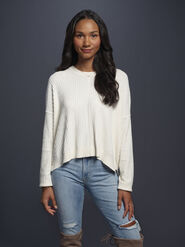 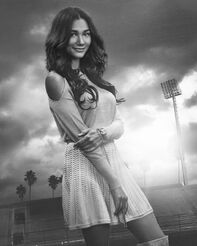 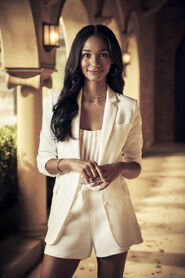