View source
watch 01:36
We're Getting Mutants in the MCU - The Loop
Do you like this video?
Play Sound

April Blair, Mike Herro & David Strauss
"99 Problems" is the second episode of the first season of All American. It premiered on October 17, 2018.

THE MORE THINGS CHANGE – While trying to be all things, on and off the field, Spencer quickly discovers the rules he played by at Crenshaw no longer apply in Beverly Hills. Meanwhile, Coop is also forced to learn a new set of rules, with Spencer’s protective “Halo Effect” now gone.[2]

Spencer continues to live within the household but Billy's constant attention to Spencer causes a rift between his relationship with his son Jordan and Olivia with Asher becoming aggressive towards him because of his interest towards Layla. Spencer continues to travel down South but his friend Coop continues to hang out with gang member Shawn and forced to pledge loyalty by dropping off what is supposed to be drugs but actually a gift to an ex-member's grandmother and soon informs Spencer that he has to live his own life. His constant visits also worry Grace as she wants what's best for him. At scouting night, Asher's father soon disrupts the scene after his son is injured earlier on accidentally by Spencer and announces that Spencer has been staying in the Baker household. A confrontation between Shawn and Spencer and an injury leads to Beverly Hills losing the game. 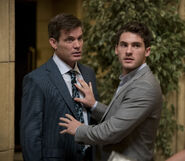